A few days ago, I was looking for a slow cooker King Cake recipe and all I could find was Megan’s Crock Pot King Cake Fail. I knew that it is possible to bake yeast dough in a slow cooker because I made cinnamon pull-apart bread in it before, so I decided to ask the admin of the Slow Cooker Crock Pot Recipes Facebook Page if they had any idea how to tackle slow cooker King Cake. They never tried making it either, but suggested cooking it on low for 4 hours. 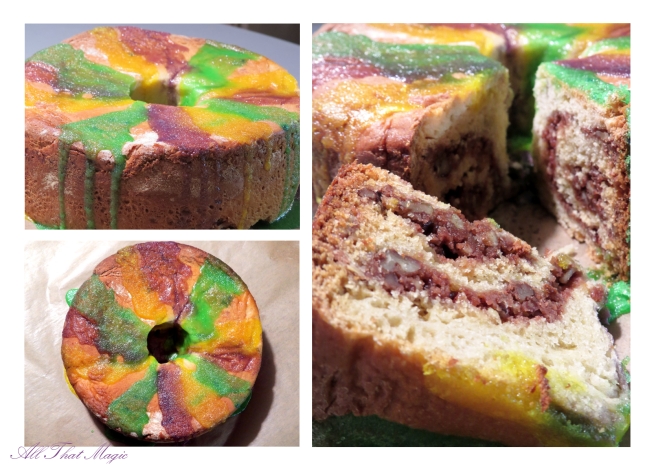 I used Jo’s Mardi Gras King Cake recipe and followed the instructions. It makes two King Cakes, which is why I only made half the recipe for the pastry, but not for the filling – I love lots of filling! I didn’t use Jo’s frosting and made maple frosting instead.

When I was done rolling and shaping my King Cake ring, I buttered the surface of my slow cooker to prevent the cake from sticking to it. Then, I carefully transferred the ring-shaped King Cake into the slow cooker and inserted a cylinder made of tin foil and covered with parchment paper into the middle of the ring. I put the lid on the slow cooker and waited for 10 minutes until I turned it on low.

I left my King Cake like that for 2.5 hours (on low). This was when I noticed the edges getting a little too brown and so I just turned the cake upside down and left it like that for one more hour (also on low). 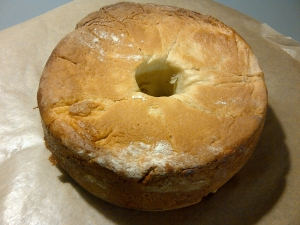 I removed the King Cake and put it on parchment paper. While it was cooling a little, I prepared the maple icing. You are supposed to use about 1 tbsp milk, 1 tbsp maple syrup and 1 1/8 cups of powdered sugar. I was almost out of powdered sugar, so I substituted that with granulated sugar and some more milk. I divided the icing into three parts and mixed it with food coloring. Then I drizzled it onto the King Cake.

What would I change?

I hope all this is useful for you. Happy cooking/baking and happy Mardi Gras!

7 thoughts on “Recipe – How to make Slow Cooker King Cake”

Thank you for stopping by!

I'm working on my thesis, so there are fewer posts these days.