I really hope 2015 will be a great year for all of you. It can only get better 🙂 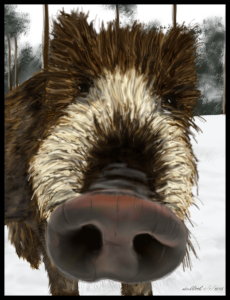 I’ve been very busy all through December preparing for Christmas, celebrating my birthday and visiting family. But I didn’t forget to read, so I’ve got a lot of reviews prepared for you. 🙂

The first year of Great War remembrance is over now and I read yet another Great War novel. This time it’s The Moon Field by Judith Allnatt.

In 1914, George Farrell, a young English postman decides to join the war in the heat of the moment when he learns that his crush Miss Violet is already promised to someone else. When George and his comrades arrive in France, they are surprised that they are to fight at the front like professional soldiers.

George soon finds himself knee-deep in mud. The cold and wet is creeping into his bones. Reading about the deafening noise of exploding shells and the stench of decomposing bodies is almost unbearable and you’ll start to understand that you can’t imagine what it must have been like for millions of soldiers who fought this war.

While George fights at the front, his best friend Kitty is at home doing men’s jobs and she really enjoys being able to do so. She knows what she wants but has to live a life restricted by society and class. While Kitty is the hard-working girl walking straight into a modern world, Miss Violet seems like a fading picture of a past era. She’s like a princess in a castle waiting for Prince Charming to come and save her.

The plot switches between George’s, Miss Violet’s and Kitty’s view  In the beginning, Miss Violet’s plotline is most gripping, but that changes as soon as George joins the war. Even though it takes a bit to get going and you’ll definitely need a sturdy stomach, The Moon Field is a truly rewarding read.

The month is almost over and I’m a little behind on reviews. 😉 Today you’ll get another review that fits the Great War Centenary topic. I read Louisa Young‘s My Dear, I Wanted to Tell You which was shortlisted for the 2011 Costa Novel Award.

A letter, two lovers, a terrible lie. In war, truth is only the first casualty.

While Riley Purefoy and Peter Locke fight for their country, their survival and their sanity in the trenches of Flanders, Nadine Waveney, Julia Locke and Rose Locke do what they can at home. Beautiful, obsessive Julia and gentle, eccentric Peter are married: each day Julia goes through rituals to prepare for her beloved husband’s return. Nadine and Riley, only eighteen when the war starts, and with problems of their own already, want above all to make promises – but how can they when the future is not in their hands? And Rose? Well, what did happen to the traditionally brought-up women who lost all hope of marriage, because all the young men were dead?

Louisa Young’s historical novel My Dear, I Wanted to Tell You is set in early 20th century England and France. While Ms Young did thoroughly research the time the book is set in, I had problems envisioning the setting, especially the scenes that are set at the Western Front, even though I am familiar with what it looked like from pictures.

The novel’s main characters are Riley Purefoy, Nadine Waveney, Peter and Julia Locke as well as Rose Locke, but those who most stand out are Riley and Julia. Riley, whose life we witness from his boyhood onwards, goes through a lot of changes and there comes a time when he even turns into a quite unlikeable fellow. Nevertheless, his character always stays believable. Julia Locke is the perfect characterization of a wife without purpose. Staying at home, nobody thinks her capable of doing something useful, so she slowly begins to lose her mind.

My Dear, I Wanted to Tell You starts out slow-paced but picks up so much speed in the second half that I wasn’t able to put it down. The novel switches between England and France, home and the Western Front. All main characters get their share of attention and so the reader is able to see the war and its effects from different perspectives. My Dear, I Wanted to Tell You gives us a glimpse of human tragedy and hope during the Great War and to add a little special something, Louisa Young provides insight into the history of the first successful plastic surgeries.

If you are interested in more info on the plastic surgeries done by Sir Harold D. Gillies, you can read his book Plastic Surgery of the Face online here: (Warning: Contains images of facial gunshot wounds): https://openlibrary.org/books/OL7141634M/Plastic_surgery_of_the_face

I spent this weekend as a boy devouring an adventure novel. Yup, you read right, a boy 😀 That doesn’t happen often. I read Robert Lautner’s The Road To Reckoning which I was lucky enough to win in a Twitter competition by The Borough Press. We had to tweet our top three country & western songs that we would pick as a soundtrack for the book. I chose the following:

Now that I’ve read the book, it’s kinda creepy how well they fit. The titles of the first and second song fit perfectly and the third one is up to interpretation 😀

There’s something else I’d like to show you. The Borough Press posted a special on how the cover was designed and I think it’s worth a read. You can find it here.

Synopsis quoted from The Borough Press¹:

Set in 1837, this is the remarkably poignant story of 12-year-old orphan Thomas Walker and his treacherous journey home through the wide open lands of America.‘I, to this day, hold to only one truth: if a man chooses to carry a gun he will get shot. My father agreed to carry twelve.’
Young Tom Walker cannot believe his luck when his father allows him to accompany him on the road, selling Samuel Colt’s newly-invented revolver. They will leave behind the depression and disease that is gripping 1830’s New York to travel the country together.
Still only twelve years old, Tom is convinced that he is now a man. Fate, it seems, thinks so too …
On the road west the towns get smaller, the forests wilder, and the path more unforgiving. A devastating encounter cuts their journey tragically short, and leaves Tom all alone in the wilderness.
Struggling to see a way home, he finds his only hope: ageing ranger Henry Stands, who is heading back east. Tom’s resolve to survive initiates an unlikely partnership that will be tested by the dangers of the road ahead, where outlaws prowl.

Set in the early 19th century, The Road To Reckoning takes us on a trip to the American frontier. Thomas Walker and his father make their way from New York to Pennsylvania and as I’ve never traveled that road, I had problems imagining the landscape that surrounded Thomas on his adventure. Too often, my mind created Wild West scenes where the woods and meadows of Pennsylvania should have been.

Twelve-year-old Thomas Walker is the main character in The Road To Reckoning. By letting the adult Thomas Walker narrate what happened in his childhood, Robert Lautner avoided all the difficulties that come with stepping into a little boy’s mind. This approach also added a touch of nostalgia to the tale which fit perfectly. I also really liked the character development of Henry Stands. I don’t want to take away too much, so you’ll only get three words: What a man!

The Road To Reckoning is an exciting tale that has everything you expect from a western-style adventure: horses, dirt, bad guys and guns. It reminds me of the western novels my father used to read when he was a boy. The Road To Reckoning might look like it’s targeted at adults, but I think teenagers will also take pleasure in a trip back to the American frontier.

Thank you for stopping by!

I'm working on my thesis, so there are fewer posts these days.